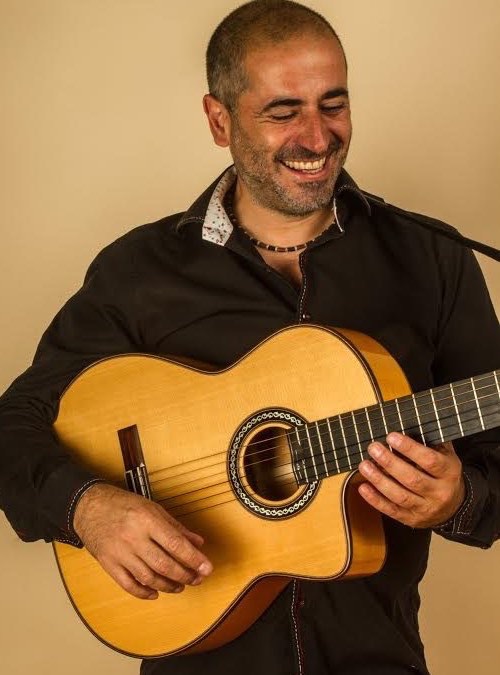 Andrea picked up his first guitar at the age of 6. Initially classically trained, he later moved on to modern styles, employing electric guitars and performing original music with bands. Part Sicilian, part Ukrainian, he grew up on a diet of Russian folk, Klezmer and the Italian harmony tradition. In addition to the guitar, Andrea also plays bass and keyboards. At 14 he bought his first 4 track recorder, and thus began his experimentation with sound, as he recalls: ‘I remember lying on my bed with headphones at night, listening to the raindrops through a microphone hanging down from the window.’

After a brief spell in the compulsory Italian military service, Andrea left the shores of his homeland for London, and to study his beloved music further. The next two years were essential in terms of both experience and influences. Gaining his first job as sound engineer/producer, Andrea soaked up a wealth of recording knowledge, all the time concentrating on his own music while he worked as a producer, guitarist or sound engineer.

As a session guitarist, Andrea’s style has been influenced by world music, resulting in a colourful pot pourri of Russian, Gypsy, Klezmer, hip hop, dub, soul, Latin, Cuban and African sounds. He has performed with some of the best exponents of these styles throughout the UK and Europe, and has also released a number of records, with styles ranging from dub and ambient. He often collaborates with Basement Jaxx. His many influences include Ennio Morricone (Andrea even studied with the master himself!), Vangelis, Arvo Pärt, Gavin Bryars, Bach, Vivaldi and Brian Eno to mention a few.

In addition to being a guitarist and composer Andrea is also a highly accomplished producer and sound engineer, which is why his tracks are not only good, they also sound great!